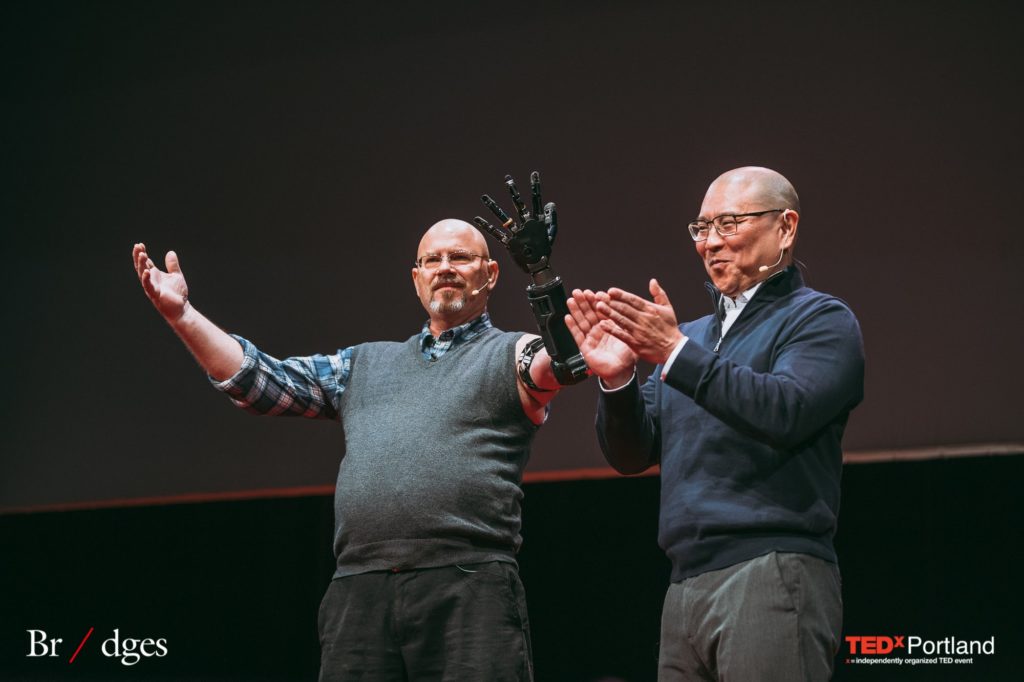 Every year, without fail, there’s a unique issue that surfaces when supporting a TEDx speaker. And, so far, it’s been a different issue every year.

One year it was struggling to memorize the talk. Another year the speaker needed hip-surgery a couple weeks before the event. The next year was a 15-year-old speaker battling some serious nerves! And one time I had no clue if the speaker would stay on script at all (a script, mind you, that took 120 hours of collaboration to develop).

This year was no different, as I found out in our first coaching session.

I was honored (and slightly intimidated) to be paired with Dr. Albert Chi, a trauma surgeon at OHSU here in Portland, Oregon. Dr. Chi is also a surgeon assisting the John Hopkins Applied Physics Lab in developing the Modular Prosthetic Limb (MPL) – the big ‘idea worth spreading’. The MPL is an advanced upper-extremity prosthetic devise but here’s the mind-blowing part.

This was an important meeting. It’s the big reveal; as a committee we finally get to hear the speaker’s first draft of the talk. The room is full of anticipation. The speaker is nervous if we’ll like the talk. We’re nervous if the talk is any good. Is it clear? Will it resonate with our TEDx audience? Does it flow? Personally, this meeting informs me how much work we have ahead of us. Are we close? Are we not?

With introductions out of the way, the talk was read out loud. A few minutes into the reading, I discretely (and nervously) glanced around the table. Did anyone understand the talk so far? Because I understood nothing. There were beautifully crafted phrases, clear transitions, and the right areas of content (thank goodness), but the technology and surgical procedures were complex, with multiple components and steps, and I simply couldn’t follow.

After it was read, I humbly confessed my confusion and asked Dr. Chi to explain the processes again to me in layman’s terms. (I’m beyond grateful that Dr. Chi is a patient kind man.) He sincerely tried but I still didn’t get it. He drew diagrams; several diagrams. I still didn’t understand. Very quickly I realized what our challenge would be this year.

Distilling down (without watering down) a complex idea to 3000 people so they could understand.

I lost sleep the next few nights trying to figure out how I could effectively support Dr. Chi. I began reading medical journals, even watching relevant youtube videos, to understand Targeted Muscle Reinnervation surgery, Osseointegration surgery, Myoband technology, and more about the MPL.  Three days after our first meeting I had a ‘ah-ha!’ moment in the shower (of all places). The dots finally connected. Here’s what I pieced together.

Through several medical procedures, doctors could identify the location of Johnny’s nerves that carried commands to his missing limb. They used bands on his upper arm to read these nerves signals and wirelessly communicate those intended movements to the MPL.  In summary, Johnny thinks about lifting his pinky, nerves send their signal, bands read the activity, the information is sent to the device, and the prosthetic pinky moves. All instantaneously.

I ran downstairs, opened my computer, and began taking notes in our shared Google doc. Dr. Chi was extremely receptive to the feedback and thus began a very collaborative partnership to hit this talk out of the park.

Here’s how we approached making his complex ideas more clear.

To discern where to scale the level of detail, we considered what was necessary for the audience to connect the dots but not get lost. My lack of medical knowledge actually became an asset; I was an effective sounding board and Guinea pig. Some areas were augmented with details to be more clear while we skimmed details in other areas because it wasn’t necessary. Next, because long-winded explanations fatigue an audience, we shortened his sentences so the audience could more easily absorb the information. Then we carefully replaced medical terminology to make it more digestible while still honoring Dr. Chi’s expertise and credibility.

We added a few more transitional statements between ideas to make each step of the process clear. For example, after explaining the remarkable motor and sensory capabilities of the MPL, the transitional statement was “Now, how do we sync the MPL to the human body so it can be controlled intuitively?”, followed by an explanation of the surgery required. We chose an electrical analogy, using terms like ‘rewiring’ and explaining his role as a ‘surgical electrician’, to help the audience ‘get it’.

We also prioritized two aspects of his speaking delivery.

First, we practiced gestures that illustrated how the nerves travel down the arm, where they were rewired into a muscle, how the bands wrap around the muscle and send intended movement signals to the MPL (did you get that!?).  These gestures not only helped the audience ‘see’ the process, but because the gestures became habitual through repetitive practice, they helped Dr. Chi remember his own content!

Secondly, we worked diligently on his vocal skills, particularly pace. For the medical terms he did use, we practiced slowing down the annunciation. Even though he has said them a thousand times throughout his career, this audience is likely hearing them for the first time. Although it felt awkwardly slow to him, it was incredibly important his pace was slower than ‘normal’.

We also worked on pausing in certain places to  give the audience time to absorb the information and make them curious for more. For example, Dr. Chi teased the audience, “Better than hearing about this amazing modular prosthetic limb is seeing it in person. In fact (long pause with smirk), would you like to see it in person?! (big pause – let the audience respond!).”

Bottom line, Dr. Chi’s willingness to scale his content to this non-medical audience, initially a painstaking task, was critical to the success of his talk.

If he didn’t, the audience may have been wowed but they would not have deep levels of understanding nor appreciation for the investment and advancement of upper extremity prosthetics.

April 21st finally came! Dr. Chi’s preparation paid off as he thoughtfully explained the complex process and showed off the device. Johnny demonstrated how he intuitively moves his arm, especially shocking when he unlatched the MPL from his body, handed it to the emcee Luis Vargas, and it still moved. Audible gasps filled the auditorium. Johnny shared his goal of playing Amazing Grace on the piano with ease as the audience erupted in applause. In the last few minutes on stage, Dr. Chi closed with an inspirational look ahead at the affordability and accessibility of the MPL for anyone needing an upper extremity prosthetic.

Adrenaline was still pumping when we met backstage. “You did all the things!”, I exclaimed. Dr. Chi looked relieved that it had gone so well (after all, it’s hard to predict what will happen under pressure). The enthusiasm and receptiveness of the audience had been palpable.

They ‘got it’; they were witnessing the evolution of man and machine.

The next day I was reflecting on the success, still reliving these moments, when I received a text from Dr. Chi and Johnny. “You’re the first to see this!” they said. Tears streamed down my cheeks as I watched a video of Johnny practicing Amazing Grace on the piano. Watch it here!

Indeed, the world of advanced prosthetics is full of hope.

Communicating your own complex ideas?

For a great example of all four tips, watch this 5-minute TED Global Talk by Joe Landolina.

Stay Informed with the

Want to stay current with new resources, great tips, research and training opportunities? Sign-up for our periodic newsletter. Rest assured, we won’t fill your inbox and your contact information is safe with us!